An added extra of studying on the Sports Courses at Sparsholt College is that you become part of our Girls’ Football Academy.

We work closely with a number of local football clubs to ensure your progression up the football leagues. Our players have the opportunity to play in the Association of Colleges’ Ladies’ Futsal League and in the Super 7s College League.

The Academy also boasts links to American universities where scholarships can be offered for players seeking international playing experiences.

Training will focus around our playing style and philosophy, technique and skills application, performance video analysis and strength and conditioning training – all at our state-of-the-art sport centre.

Sparsholt College has signed with the Chelsea Football Club Foundation – the charitable arm of Chelsea FC that empowers communities and individuals to achieve their goals through football. This new exciting association brings a new wealth of opportunities to Sport students studying at Sparsholt College, including:

“I play in the FA Premier League for Southampton WFC as a right back/centre back depending on the team’s tactical system, so am very up-to-date with the professional game. I had a season in management when injured in 2016, managing Southampton Women’s Reserves in an undefeated season and winning the side promotion to the Southern Regional Division.” 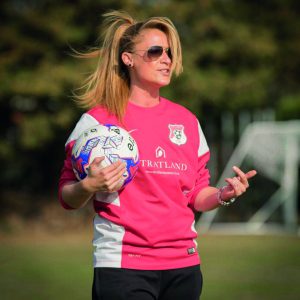 EDUCATION | WHAT ARE MY COURSE OPTIONS?

PROGRAMME | WHAT CAN I EXPECT FROM THE FOOTBALL ACADEMY?

NEXT STEPS | WHERE CAN THE ACADEMY LEAD ME?