Charlie Moore – Fish Husbandry Apprentice at Get Hooked on Fishing 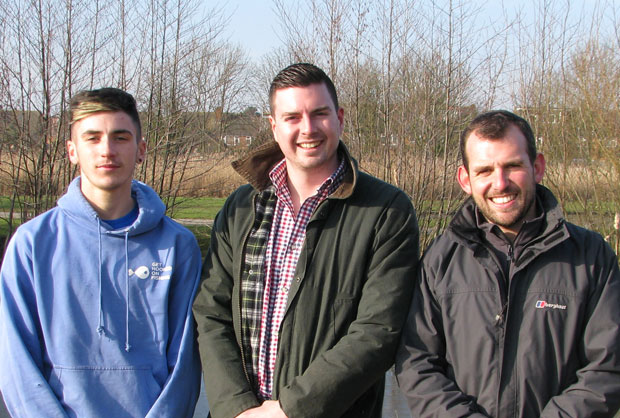 Charlie Moore enjoyed a positive experience as a Fish Husbandry Apprentice at Get Hooked On Fishing, a registered charity promoting the value of angling for young people who are troubled or who have special needs.. He successfully completed his Apprenticeship and is now employed by Get Hooked On Fishing as an Assistant Project Manager.

He was already aware of Sparsholt’s reputation, saying: “It’s the best for fishing; you’re learning with the best and the contacts are great, I’m still benefiting from it now. The lecturers have so much information; I could ask anyone a question and they could always give me an answer.”

He would certainly recommend an Apprenticeship: “You’re getting the money and experience while you’re learning. It’s a head start, a real advantage. I now have a permanent role as Assistant Project Manager and I wouldn’t have been able to do this without the Apprenticeship experience.”

Get Hooked On Fishing

James Thornhill is Project Manager at Get Hooked On Fishing for the Ealing area and worked with Sparsholt College to employ Charlie Moore as a Fish Husbandry Apprentice in 2013, making the charity the first employers to enrol to this new Apprenticeship that the College supported in development and commenced that year.

A graduate of Sparsholt College himself, James studied BSc (Hons) in Aquaculture and Fisheries Management, finishing in 2010. So in 2013 when, during a meeting with the Chairman of the Angling Trust, a new Fish Husbandry Apprenticeship at the College was mentioned, James was keen to find out more. One of his volunteers, Charlie Moore, was looking for his next move and James thought this could be a great opportunity to provide him with employment and training.

He contacted the College, who arranged a visit with him and Charlie to talk through the Apprenticeship and its content, from the units themselves to the expectations involved, and it was an easy decision to progress. James was pleased to learn about the government funding available- and the London weighting – and, although he admits it was a learning curve, found the College laid out very clearly what was involved.

James says of the experience: “It was brilliant for me as well as for Charlie; to create employment has been really rewarding and to see Charlie develop and grow has been great. He has been supported into work with training, and we’ve now offered him a fully paid contract.”

Speaking about the impact Charlie has had on the business, James reflects: “A really important element of business is to have a variety of staff and someone like Charlie brings benefits to the whole team. He can also relate really well to the young people we are working with.” Asked would he recruit another apprentice, James replies immediately: “Absolutely – we plan to employ another in the future.”

James is also keen to work with Sparsholt in other ways, and Get Hooked On Fishing are offering the College’s full-time students on the Level 1 Diploma in Fisheries Management the opportunity to look around the organisation, spend some time understanding how it works and explore a day and week in the life of some of its employees. He concludes by saying that the benefits of employing an Apprentice far outweigh any of his concerns around the paperwork and feels it is important that employers take the responsibility for training the next professional generation. “To have the support of the College and all their experience was fantastic. The level of interaction was brilliant and the regular visits helped me, as Charlie’s mentor, stay informed and involved.”

You are here: Home > Meet Our Apprentices > Charlie Moore – Fish Husbandry Apprentice at Get Hooked on Fishing