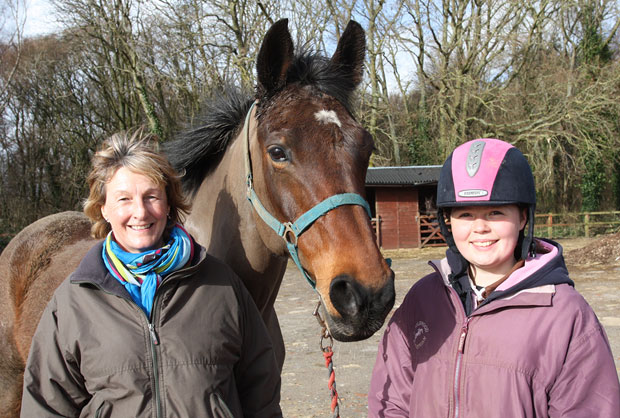 19 year old Claire already has a Level 3 Extended Equine Diploma but could still see how an Apprenticeship on top of this would not only enhance this valued qualification but give her vital experience too. In her own words, she could “work, learn, earn and get a qualification.”

For Claire the Apprenticeship is also laying a rather important role in helping her decide which direction she’ll ultimately look to specialise in. She explains: “I’ve always known that I wanted to pursue a career working with animals but it’s only as I’ve got older that I’ve been more drawn to horses. I am still very much undecided as to which particular route to take so for the moment am enjoying seeing first-hand the many different professions working in the sector. We have horse physios and veterinary nurses all visit the stable and this is helping me decide where my future lies.”

An average day starts at 8.00am for Claire and includes care of the horses, training the horses, general yard duties and, if on duty at the weekends, some teaching too. One day a week it’s back to college and the advantage of the Apprenticeship is Claire can tailor her units to her particular requirements. One of the highly valued aspects of the programme is Claire is also working towards the British Horse Society qualifications which are globally recognised.

The College, her employer Tanglewood and Claire all work as a team to ensure she successfully stays on target through regular reviews and communication.

Would Claire happily recommend an Apprenticeship? “Yes,” she says. “Unlike university you get work based experience which is invaluable.”

Sally Thompson of Tanglewood has been having Apprentices for the last two years. Claire Brewer is her third Apprentice and so far the work based training scheme is proving to be a winning formula.

Prior to training new staff via the Apprenticeship route Sally would deliver the technical aspects of the training herself. Not only would this take up valuable time but would also be an extra cost to the business as she would fund aspects such at the British Horse Society qualifications herself.

“It’s great now,” said Sally. “All the things that would previously take up my time and cost me money are now covered and funded by the Apprenticeship scheme. We work very well with the College and are always aware of what’s being covered in the classroom so when can embed that once back in the stable.”

Sally also likes the fact that with an Apprentice she can train them the Tanglewood way from day one. She looks for people who are quick and efficient, not scared of horses and have people skills as they will be dealing with customers of the two legged variety. She feel it’s a huge benefit to the business to have an extra pair of hands who can take on a variety of tasks. “It’s a team effort at Tanglewood,” explains Sally. “We all see the value of having an extra pair of increasingly qualified hands.”

So would Sally happily employ an apprentice again? She would indeed.

You are here: Home > Meet Our Apprentices > Claire Brewer – Equine Apprentice at Tanglewood