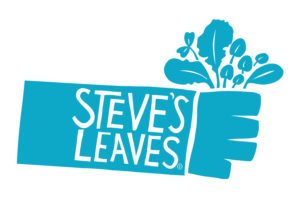 Dr Steve Rothwell founded Steves Leaves over a decade ago at a watercress farm in Hampshire. Steve is a true pioneer in the world of salad leaves.

Our difference is tiny

Steve believes that the secret to fabulously fresh and tasty true baby leaf salad comes down to our key principles. Firstly, the smaller the leaf, the better. We only harvest the teeniest, tiniest baby leaves – as we believe these have more natural flavour. Secondly our leaves grow slowly in natural sunlight, to give them crisp tender stems and a natural vibrant colour, they’re then washed in pure spring water. Finally, we’re officially ‘Fair to Nature’* – by growing seasonally and looking after the natural environment, we get the best out of our farms. And we think our leaves taste just that little bit more amazing for it!

The judges agree! Steve’s tiny leaves do have more flavour and this is backed up by some great awards.

Steve’s hard work pays off as our smaller, naturally grown baby leaf salads launch to wide acclaim – including a Great Taste award and praise from Masterchef judges John and Greg!

From field to festivals

You can now find our salads in your local Waitrose, online at Ocado and at all quality farm shops. But if that’s not enough for you, you can follow us on Twitter and Facebook, and get closer still when we take Steve’s Salad Shed on tour to festivals including CarFest and Jamie’s Big Feastival.

The University of Southampton is currently ranked in the top 1% of universities worldwide and is a founding member of the group of leading research-intense UK universities – The Russell Group where it is in the top 10 of this 24 strong group. The university has also recently been identified as a Nature Index Rising Star and is the 7th university in the top 25 Western European Institutions.

Based on the south coast the university has more than 20,000 students engaged in wide-ranging science, engineering and humanities subjects as part of their undergraduate and postgraduate training.

Research on watercress and other leafy salad crops has been underway at the university for the past decade, based in the new £45m investment in the ‘Life Sciences’ which includes the Malcolm Isaac glasshouses, large open-plan laboratories and a suite of extensive molecular and other facilities for the study of plants.

The laboratory of Professor Gail Taylor has discovered novel wild varieties of watercress that are now being trialled for future release. On-going collecting across the world is identifying new sources of this tasty leafy crop packed full of vitamins. As part of a traditional breeding programme, where crosses between interesting watercress varieties are made by hand, the group has developed over 200 unique varieties that are now being tested for their cancer-fighting chemistry and nutrient density.